PROJECT DESCRIPTION: The key objective of this project is to formulate, implement and validate a multiscale finite element scheme to investigate the damage mechanisms taking place in thin films used in MEMS (Micro-Electro-Mechanical Systems) applications. Of particular interest are the creep and visco-plastic response of these films, which have been shown to strongly affect the performance of the mems device (see figure below). 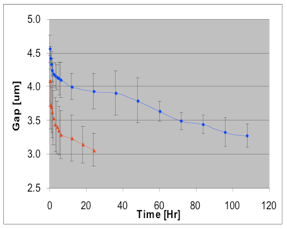 Effect of creep damage on performance degradation in Nickel varactor: evolution of the gap size (in microns) for two values of the voltage (Red: 70 V; blue: 50 V). 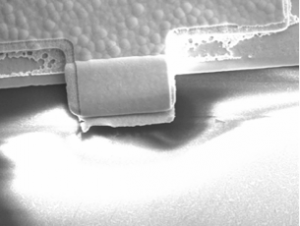 hinge failure in gold RF device. note how the geometric features (step size, radii of curvature, …) of the device compare with grain size.

Due to the very small size of these devices, the granular microstructure of the material is expected to play an important role in the initiation and evolution of these damage mechanisms. In particular, we aim to model the competition between intra- and inter-granular damage mechanisms taking place in these materials. to that effect, we are developing a 2d and 3d multiscale finite element framework that allows us to relate the damage taking place at the meso-scale to the macroscopic constitutive response of the material (see figure below). 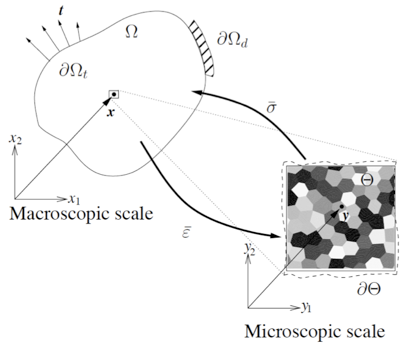 Schematic representation of the multiscale framework for the study of damage evolution in polycrystalline materials.The lower-right figure shows the periodic unit cell on which the competition between intra- and inter-granular damage processes is captured.

The models used at the microscale are inspired by experimental observations obtained by Nikhil Karanjgaokar, a PhD student in Prof. Chasiotis’ research group in the aerospace engineering department. the experimental measurements are also used in the validation of the numerical prediction. an example of such comparison can be found in the next figure. 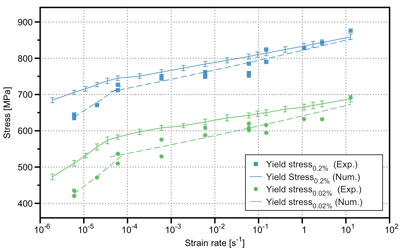 Comparison between numerical predictions and experimental measurements of the rate dependence of yield stress (based on 0.2% and 0.02% strains) in 1.76 micron-thick gold films. both experimental and numerical results show a clear shift in the rate dependence of the mems film at small strain rates (below 1e-04 /s), showing the increasing importance of inter-granular diffusion-driven grain-boundary mechanisms.