PROJECT DESCRIPTION: A majority of the efforts to date in modeling fracture have used continuum models built upon using partial derivatives with respect to the spatial coordinates in the force and displacement relationship between adjacent particles. However, these methods are inherently ill-suited for modeling cracks because the partial derivatives are undefined along the crack where the displacement field is discontinuous. Consequently, in order for these methods to model fracture, they have to remove the discontinuous displacement field either by redefining the body, using various methods, such that the crack lies on the boundary or by using other method-specific techniques for evaluating the spatial derivatives on crack surfaces.

In contrast, peridynamics is a continuum model for efficiently handling the spontaneous formation, propagation, branching and coalescing of cracks by using integration rather than differentiation to compute the force at a material point, resulting in valid equations everywhere in the body. Consequently, particles are influenced by other particles, via bonds, separated over a finite distance; hence the method is classified as a nonlocal theory. 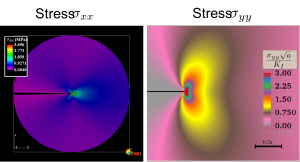